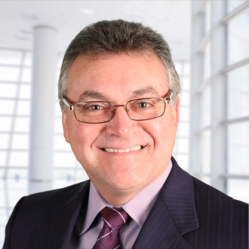 Jim is a Senior Wealth Advisor at IronBridge and leads the High Net Worth division working primarily with business owners and senior executives.

His practice specializes in Wealth Distribution and Risk Management strategies. He has been recognized and received numerous awards for his personal production, coaching, and leadership results. Additionally, Jim is active and much sought after as a featured speaker to both industry and public groups and is a Certified Ethics Instructor by the CFP® Board of Standards, Inc.  Jim is a CERTIFIED FINANCIAL PLANNER™ practitioner, a Chartered Retirement Planning Counselor, and is an original Director of the National Association of Estate Planners and Councils (NAEPC) first ever Virtual Chapter.

Jim hosted his own financial planning television show entitled “Wealth Matters”, an educational program that featured interviews with prominent leaders within the state’s insurance, legal and investment industry, aired on various cable systems throughout Connecticut. He also has appeared on NBC and ABC discussing a variety of financial topics.  Jim and his wife, Kathleen, live in Windsor, Connecticut.

*No affiliate relationship, committee member only.